I witnessed an attempted murder in my front yard this morning. I noticed the struggle while I was in my garden, trimming my holly bush. So stunned was I by the scene, I stood motionless with my hedge clippers in hand, unable to look away. Fortunately for the victim, it was able to escape the clenches of death. It was so excited, it high fived me in the face as it flew away. Oh, yeah. It was a little moth which had escaped a spider web. I’m pretty sure I saw the spider shake a few angry fists at the moth as it flew away.

I witnessed all this while I was outside doing my semi-annual gardening. I really hate gardening, but it really needed to be done. My azalea and holly bushes were losing their uniform shape and encroaching on our front steps. It looked like fucking Mirkwood in there with all the spider webs that have taken over. 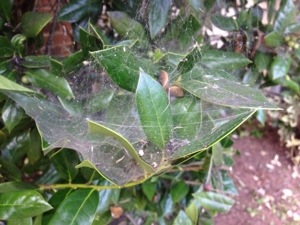 Weeds had crawled in and spread out, much like the ants that live under them. And the tree bush on the side of the house was becoming taller and more expansive than ever, despite the diseased places and my efforts to keep it contained. It’s not that I hate nature. I just prefer to enjoy planet Earth the way God intended: in HD, narrated by Sigourney Weaver. It’s really the bonus features I don’t care for, like the bee that stung me on my back while I pulled weeds. Or the gnats who thanked me for freeing them from their spider webby prisons by nuzzling me gently in my eyes and nose.

I really hate that tree bush, though. Every time we have a storm, rain or snow, I hope beyond hope that it will get knocked down. It toyed with me one winter. We had just had one of our snowpocalypses, and the weight of the ice and snow brought it down to the ground. I danced with joy! I was so happy that tree was going to have to come out without having to pay a tree company to take it out after I had gotten the approval of our homeowners association. (Side note: I really need to try and get the HOA to approve Zen gardens. It’s believable that they would promote both peace and property values, right?) But no; it was not to be. Once the snow began to melt, it sprang back up like it had taken tree Viagra. Birds really seem to love it, which is great until they wake your children up with their chirping super early in the morning, and decide that your front porch is the best place to take a shit. I decided that some of the large branches really needed to come down in order to contain this thing, so I got our little tree saw and went all Fern Gully on its ass.