When I was a little girl, I had a doll in my room that my mother kept there for decoration. She was a stuffed country doll with curly gray-brown yarn hair under a puffy red hat. She had a matching country lace trimmed red gingham dress. Her round hands and flat face were creamy white with just a touch of rose on the cheeks. I don’t remember if she had a mouth, but I think if she did, it was an embroidered line in light brown. For eyes, she had simple round dots of clear sky blue.

And I was terrified of her.

Her name was Bessie, and she sat on my toy box, scaring the ever loving shit out of me. By day, she was to be approached with caution. As long as sunlight streamed into my room, all she could do was sit motionless, her murdery hands waiting. Her empty eyes were actually full of whispers that said, I’m watching you. I used to turn her around so she couldn’t look at me, but she was always turned back around, because decorating. But at night, she would come alive in my dreams. I learned to sleep under the covers so she couldn’t leap off the toy box and bounce over to my bed in the dark. But man, did she mind fuck me. I would know she had come alive because I would hear a noise that sounded like a cross between reverb, speaker feedback, and the sound of the asteroids blowing up in the Jengo Fett/Obi-Wan Kenobi chase scene in Attack of the Clones hitting a wormhole. I had nightmares of her chasing me down the hall. I would run, floating through the air, but always woke before she caught me.
I told my parents I was terrified of this down-home, country succubus, but they believed me to be silly. It wasn’t until the summer between 7th and 8th grade when we were packing to move that my mom fully realized how terrified of Bessie I had been. She had been put away at some point, but she had found her way back to me. As she lay there in her packing box, she had all the nonchalance of Sup?, but to me she said with her obscured chin mouth, I’m going to eat your brain! 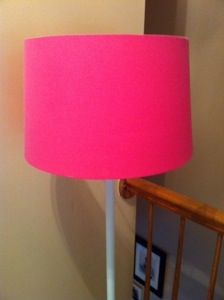 It is beyond aggravating, because it means we don’t currently have light in her room. But I get it. Her nightlight would shine up through the bottom of the shade and would create a shadow of the lightbulb with the wire crosspieces behind it, making it look like a skull and crossbones on her wall. For awhile, she accepted the fact that it was just a shadow; we would put on shadow puppet shows to reinforce this concept. But now, if we try to have the lamp in her room, especially at night, (even though we’ll move the location of the lamp) she screams that it’s “skehrwee” and wails like a banshee until we remove it from her room. As frustrating as it is, I really don’t blame her. Even the most developed of minds can be startled by an odd shadow in the middle of the night. As least I know her imagination isn’t broken. Also, one minute it’s a shadow. But if you’re not careful, the next minute you’re Linda fucking Blair and doing the crab walk down the stairs and in desperate need of a barf bag. So really, Zoë’s a natural survivalist.

And as far as

See? And you thought fearing the lamp was just silly.