My daughter is an asshole.

Believe me, I love Zoë to pieces, but in the middle of the night when she’s incoherently screaming bloody murder and nothing will satisfy her, she’s kind of an asshole. If you’re sitting there, shocked that I would say such a thing about my own child, clearly you’ve neither had a child with sleep issues, nor a single bad thought about your own child because you’re a saintly parent. And if you’ve never had a single bad thought about your child, you’re either a liar or not a parent.

Zoë was a fantastic sleeper when she was tiny. She slept through the night her first week home. Then, right around 6 months, a switch flipped on and it we’ve never been able to switch it back off. What began as the normal 6 month sleep regression morphed into night terrors. Between 90 minutes to 2 hours after laying her down, like clockwork, Zoë would wake up screaming like a banshee. She would stand in her crib, eyes glazed and fixed on a distant point not in the room, and run from us if we tried to pick her up or comfort her. After a few minutes, she would calm enough that we could pick her up and rock her back to sleep. The number of hours and tries it would take to get her back down to sleep would depend on the direction of the wind and alignment of the stars. As she grew older, we tried to get her to soothe in her crib when it was a normal crying fit, but she would have none of it. Her pissed off screaming could be heard from the street. I was pretty sure our neighbors were going to call social services any day because it sounded like we were murdering her. Nothing we tried helped. From attachment parenting to cry it out and Ferberizing, the little sleep dictator demanded things her way. More nights than I can count, I spent sleeping in our glider because whenever I moved to put Zoë back to bed, she woke up crying. (Also, to the smug assholes who laughed in my face at Babies R Us when I recommended our glider and ottoman to them can suck it. Clearly, this thing was an investment. I hope you had sleepless nights in the cheap ass, uncomfortable rocker you ended up with. It’s call karma!) Mike would take turns with me so it didn’t all fall on me, but Zoë is a mama’s girl, so many times I ended up having to deal with her anyway. Everyone knew of our plight, especially from the Facebook statuses I would post at 3 am. So those people would ask how Zoë was sleeping. It got to the point where we refused to tell them, because after any time we’d say it was getting better, we’d have the night from hell that night. You don’t talk about Fight Club. 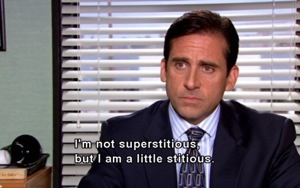 Often times when she would be inconsolable, especially if Mike was losing his cool with her, my body would start burning. My arms and legs would sear off better than a roast. Once I had the diagnosis of fibromyalgia, I understood than the stress of the situation was amplifying my pain. The lack of rest was not allowing my muscles to release at night, which led to more aching. I felt like I was living with post traumatic stress. I almost held my breath every time we laid her down for the night. Whenever she started crying, I would essentially panic, knowing the pain and the stress of the night had arrived to torture me.

Each new change brought a new sleeping challenge: coming back from a trip; learning to fall asleep in her crib; staying in her big girl bed and falling asleep. Lately, she has been sleeping in her bed….once we got her to sleep. But last night was the night from hell. She came into our room around 3ish and slept with us for awhile. Once Mike tried to put her back in her bed, it was on. She was up for the next couple of hours, her screaminess dotted with brief periods of calm. Both Mike and I lost our tempers with her, exhausted and wholly impotent, unable to figure out what she needed or wanted. Eventually Mike took her downstairs so I could rest, (I woke the screaming beast because I had the nerve to try and lay her down so I could relieve my spasming bladder.) I woke up this morning with him back in bed and Zoë in her bed, so I know he eventually succeeded.

Often, the next morning after that kind of night, we greet Zoë with a, Hello, Zoë, a la “Hello, Newman.” The next morning, it’s like it never happened. Our exhaustion is the only thing that remains of the hellish night before. After all, how can we stay mad at someone so cute?

I has the cute so my parents don’t eat me

2 thoughts on “I wish I were a toddler, then I could lash out irrationally”