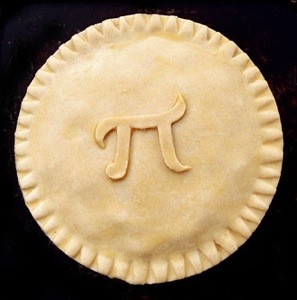 October is Pie Month. At least, it is for me. The interwebs say Pie Day is January 23rd. And did you know there’s an American Pie Council? *nod*

Like it or not, the holidays will be upon us soon. This year, I will probably end up doing a lot of cooking. We’re spending Thanksgiving with my in-laws, and unfortunately my mother in law’s back doesn’t allow her to stand very much. We’re spending Christmas at home, and I’d really like to the make the dinner. That will probably end up in disaster, as I’ve never roasted a turkey before but, go boldly, right? 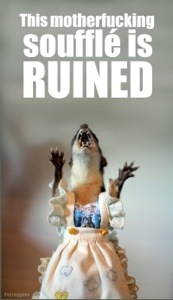 Image from The Bloggess

I have a tendency to like to practice big deal things that I’ve never tried before. People make fun of me for my trial runs, (Mike) but do I hear complaining because a cake is awful and has imploded? No. So, before the craziness of the holidays gets here, I decided I wanted to do pie trial runs. I tend to shy away from pies, especially if it involves making my own dough. Dough seems all easy and innocent until you find yourself on the floor with fragments of dough in your hands crying, Why, God? Why? My last attempt at pie dough didn’t end well. The recipe called for vinegar, and you could taste it in the final product. So I wanted to find an easy, butter crust recipe that even I couldn’t fuck up. (I couldn’t bring myself to do a lard crust.) And I found it. It had a grand total of 5 ingredients. I thought, how hard could this be?

Um, really fucking hard….if you, you know, don’t follow the recipe. I doubled the recipe because I wanted double crust, and I accidentally didn’t add enough water to the dough. I realized this at the time but thought, The dough came together and looks like it should. It’ll be fine. And then, of course, it wasn’t. I went to roll it out, and the dough just kept splitting on me. I tried mushing it back together, but to no avail. The dough was too dry. I really didn’t want to start all over, so I did the only logical thing: I held the dough under the kitchen faucet and added water to the dough. At this point I’ve probably overworked the dough, but hopefully it can be saved. I stuck the dough back in the fridge to harden up, so we’ll see here in a minute.

I’m going to go ahead and blame all of this on the government shut down. I think that seems reasonable. So… Fuck you, John Boehner.