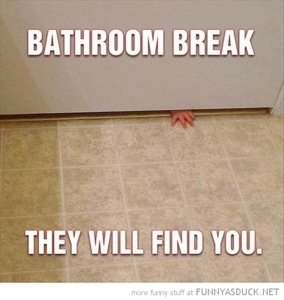 Zoë has given up naps. At least, she’s given up napping at an appropriate time when it’s my idea. Lately, she’s taken to falling asleep on the couch around 4 pm, and then good luck waking her up. Yesterday, I gave her zerberts and ran the vacuum and she didn’t stir. I still occasionally try to get her to sleep at her previously regular time. Today was one of those days. Sometimes giving her a cup at night helps her stay in her bed, so I read her a story and laid her down with her cup. Of course, she didn’t stay down for more than a couple of minutes.

Eventually, she wondered into my bathroom where I was…..sitting. Her cup was empty and she wanted more water. I told her I couldn’t get it for her right at the moment, but I would when I was all done. Apparently, in two year old language this translates to, No. But if you start hitting me with your cup, that will make it happen. So please, my dearest little one, incessantly bop me with your cup until I meet your demand. I tried to talk to her and redirect her, but there’s only so much one can do when they are stuck on the potty. Um, why didn’t you just shut and lock the door? you might ask. OF COURSE! I’m an idiot! Why didn’t I think of that? Actually, that would be a lovely option if our door wasn’t messed up and actually would lock.

Anyway, after reasoning with the little dictator with the pink sippy cup for the hundredth time, I finally lost it and screamed at her that I couldn’t fill her cup and to go away. Her bottom lip pooched out and began to quiver. She ran away crying the cry that every parent will recognize: You didn’t do what I wanted and then yelled at me, and now my feelings are so terribly hurt and I’m devasted, oh GOD! I started to feel bad. I’m the grown up. I lost my cool. I hadn’t laid my hands on her, but I probably scared her. Yelling can sometimes be just as bad as a spanking. I started to think I was a terrible parent who had no business raising children.

And then I thought: She was smacking me with a cup while I was trying to take a shit.

And she couldn’t have been too damaged. She was back two minutes later, her quest to fill the pink holy grail renewed.