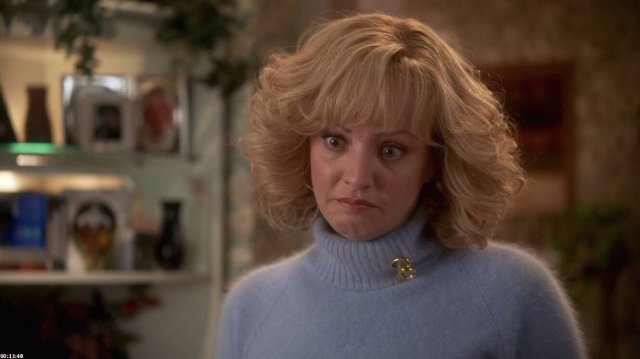 If someone were to describe me, “patient” would not be anywhere near the top of the list. I would probably also say that I’m just a few turns short of tightly wound. These traits are not ones that predispose me to mother of the year. The universe, being the goofy, fun-loving prankster it is, threw in fibromyalgia on top of those traits. The chronic fatigue that comes with it just drags any patience or composure I have down and repeatedly kicks them in the nuts. The result is a bear having been poked one too many times.

My self-control has been tested a lot lately, especially in the mornings before school. This morning, in particular, was epic. Rachael isn’t really a morning person. Much like me, she’d rather snuggle under her covers or stab you in the face than bounce out of bed with a smile. This morning, however, she was out of bed before I was. She came in to snuggle with me for a few minutes before walking downstairs for breakfast. As we began to head downstairs, she complained of her legs being cold and wrapped her blanket around her waist to keep her legs warm. It dragged on the floor in front of her. I told her I was afraid she would trip on it and asked her to pick it up and carry it normally. She whined and said she wouldn’t trip. We repeated ourselves a couple of times before she drama queened out, turning her back to me and shoving her face in the corner. She cried that it was her blanket and she’s the one who decides what to do with it. From there, she flopped to the floor in the fetal position on top of it. I firmly told her that if she didn’t get up and stop whining, she wouldn’t get to take the blanket downstairs with her at all. For some reason, she took this as her cue to get up and try to flee to her bedroom. I followed through on my threat and chucked the blanket down the hall. Much ugly, hysterical crying ensued. As she sat crying tears into her waffle, I tried to explain to her that it was a consequence of her choice. Eventually, because he speaks Rachael, Mike got her to calm down.
The rest of the getting ready process went smoothly until what is usually the worst part of the morning: getting out the door. This is the time that I have to scream at Rachael to put on her coat as she argues that she doesn’t have to wear a coat because she has on long sleeves. (It was 26 degrees and windy this morning.) This is the time when both girls become incapable of finding their shoes because they suddenly begin laboring under the misapprehension that their shoes are located on the ceiling. This is the time that Zoë believes I am violating the Geneva Convention on torture because I insist on her wearing gloves. All of this while we were supposed to be out the door three minutes ago. I am convinced that our neighbor is going to call social services on us at some point.

This evening, Zoë refused to eat her dinner. Instead, she insisted on only drinking her milk out in front of the tv. Being the horrible mother I am, I countered with eating her dinner in the kitchen or nothing. I did eventually get her to eat dinner; I had to bring dinner to an abrupt end when she decided to smear peanut butter everywhere and purposefully let milk spill out of her mouth.
Rachael, on the other hand, did a spectacular job eating her dinner. Her meltdown came later, when I prevented her from moving the trash can as much as she wanted. She’s been crossing days off her calendar, which hangs from a cork board above our kitchen trash. As she was moving the can, I became concerned that it would get knocked over, (it’s almost as big as she) and told her she didn’t need to move it anymore. Holy screeching crying fit, Batman! She screeched that dad didn’t do it that way and continued to scream incoherently through her tears. I sent her to her room to calm down. She walked to the stairs and continued screaming at me from the stairs. I told her again to go to her room, and that she could come back down when she was able to talk calmly. This was when she unleashed words which I thought I wouldn’t hear for at least a few more years: I’m the boss of me! You’re always telling me what to do! You’re just trying to make me like you!

Now, let’s rewind… fwurp fwip wup squip squeeeeeee wheep wurp…. and do that again. This time, let’s add in an unhealthy dose of soul crushing fatigue and hyper reactivity to stimuli, such as loud noises. Trying to handle such drama and shenanigans is hard enough when you feel like you have the resources to be an adequate mom. Remaining calm when you almost can’t catch your breath because your fatigue makes you physically feel like a human pretending to be Atlas is something the IOC should make an Olympic event.

Theory: Atlas dropping Earth because he has to scratch his balls is the real cause of earthquakes.

I’m sometimes successful in using what Mike calls your NPR voice to coax the girls into doing what they’re supposed to do. In fact, I prefer to remain calm so as not to wreck my voice and avoid pressure in my chest. But when you’re on your third or fourth time of asking your child to do something like, come here, you’re going to lose your cool a bit. The best part is when they say, Okaaaaaaay!, in an exasperated tone, like you’re the unreasonable one. If you weren’t so aggravated, you’d think it’s funny that you’re basically living out a scene from the Cosby Show. Come here. Come heeeeeere. Here. Here. Come heeeeeere!

I wish I had some sort of wisdom to share with others who live with fibromyalgia and ME/CFS and also have children, but I don’t. All I have is my hope that tomorrow will be better, that the kids will be more cooperative and I’ll be less screamy. Oh, and that their visits to the therapist when they’re older won’t be too expensive.