I’ve been crazy busy this week preparing for Christy’s baby shower. I’m trying to pace myself so I don’t completely overdo it and end up useless by Saturday.

I did the grocery shopping for the shower today. One of the games we’re playing is “Guess the Poo”, wherein melted candy is placed inside a diaper, and then people guess which candy it is. It was done to me at my shower. Payback is awesome! Of course, to play the game, it meant buying several candy bars at the store. So, here’s the fat girl, leaning over with butt in the air, grabbing 8 candy bars. That was fun. Especially when I ran into someone I know.

A post about the shower will be up soon after the party. Until then, I offer up some party crafting and Rachael cuteness to tide you over.

Party decor doubles as a gift for baby boy’s nursery. 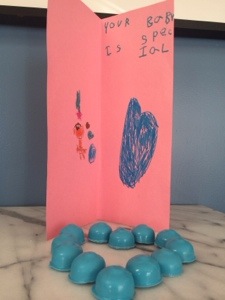 Rachael wanted to make a card for Christy and Mark. It’s a picture of a baby under a star mobile and a bunch of hearts. She asked me to spell the words out so she could write, “Your baby is special.”

One thought on “Crazy busy”