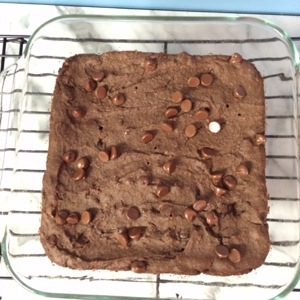 It was awhile ago that a friend of mine suggested that I try making black bean brownies and compare them to regular brownies. She said that they supposedly tasted just like regular brownies. I adore brownies so, naturally, my initial reaction was…

But I finally gave them a try yesterday. I was surprised to discover that I had all the necessary ingredients on hand. While they certainly were more involved than opening a box and stirring in oil and eggs, they were simple and came together fairly quickly.

Preheat oven to 350 F. Combine all ingredients except chips in a food processor. Blend until completely smooth and large pieces of bean skin are not visible. Stir in the chips, then pour into a 8×8 pan coated with non-stick cooking spray. Bake 15-18 minutes, until a toothpick comes out mostly clean. Let cool at least 15 minutes before trying to cut. 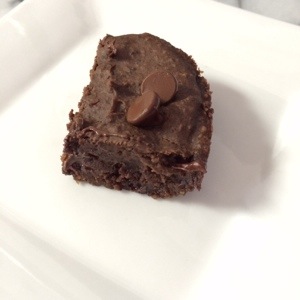 The verdict
I discovered that you really do need to let the brownies mostly cool before trying to cut into them, otherwise they just fall apart. Once cooled, the consistency is much like a piece of fudge. The texture is mostly smooth, but slightly gritty. Overall, the taste was chocolately, with a hint of oatmeal aftertaste. You can tell that something is a little off, but you don’t care because they’re rich and delicious.

The nice things about these brownies is that they’re kid approved. Rachael and a friend tasted them after school and loved them. Rachael declared that I make the best brownies. It was only after they had eaten them did I reveal that they were made with black beans. Rachael was even able to be bribed to get out of bed this morning if i sent one with her lunch today. So I would say that these are an excellent way to sneak fiber and protein into your kid’s diets.

In the end, I think these are a great way to satisfy a snack craving. They’re yummy and it would be difficult to guess that they’re made with black beans. But do they taste just like brownies? No. Anyone hoping for a cakey or chewy, dense brownies will not find it in these. However, I would absolutely make these again.

Query: are they still healthy if you eat half the tray in one afternoon? Asking for a friend.