I, like most people, get songs stuck in my head. It’s not only that, though. I also tend to get words or phrases stuck in my head. Sometimes it’s the name of a place, like Macchu Picchu. Sometimes it’s lines from movies or a tv show. For reasons unknown to me, when I read the Body Science book to Rachael, the term vas deferens made its home in my mind. The rhythmic squeaking of the girl’s LeapPads when they erase something conjures up the words hush puppies, said in time with each squeak. My bizarre masterpiece thus far, though, is when octogenarian was stuck in my head. Somehow, the Uruk-hai in The Two Towers insisting, “They are not for eating,” when the other orcs wanted to eat Merry and Pippin wandered in. It was closely followed by Winnie the Pooh lamenting, “I wasn’t going to eat it. I was just going to taste it.” The result? 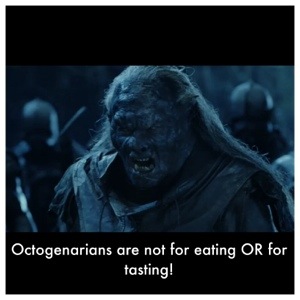 Yeah. I know most of you are backing away slowly from your computers right now. This has a point, though. I promise.

I’ve been having a hard time lately. I’ve been running on empty. I think my medication for depression and anxiety isn’t working as well as it used to, which my doctor warned was a possibility with Cymbalta. The pain and fatigue of fibromyalgia has left me feeling hopeless and helpless. The likelihood that I will live with this for the rest of my life, and I’m not quite 33, makes me feel trapped. Yesterday was particularly bad. Fortunately a nap helped make things feel less desperate.

Today, my energy is alright and my pain is mostly in my feet. Even so, today, just like every day, is a battle to not give in to the fatigue and pain. To not give in to the depression and resign myself to being listless on the couch. To not give up the hope that I still have good days ahead of me and that I could possibly get better some day.
It’s actually kind of hard to keep the fight in me once I step into the warm, relaxing embrace of my morning shower. As I stand there with my eyes closed, letting my muscles relax, it’s easy to say, Fuck it, and just give in. Today, though, I was saved by words suddenly springing to mind. At first, I just heard the voice behind the words, pleading. Then the words formed, “Don’t give in. Not now.” The words Lady Arwen said to Frodo as he began to pass into The Shadow. For some strange reason, I felt bolstered by these words. I know it’s weird, but whatever works, right? As they repeated in my mind, they became a small mantra that helped me refuse to become a shadow of myself. At least for today.

2 thoughts on “The magic of elves”