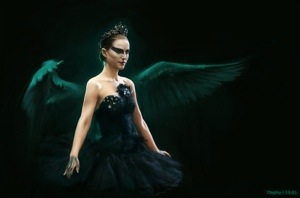 Today, after centuries of existence, Zoë destroyed the art that is ballet. As the gaggle of eager ballerinas gathered around their teacher, Zoë carried out her devious plan. As the girls performed their butterfly stretches, Zoë struck. Her wings spread, wide and menacing, wrapping the room in her darkness. She moved quickly, plundering the joy of the day and replacing it in their hearts with pure horror. The teacher did her best to protect the young ones from this foul beast, shielding them with her own body. But it was no use. No one was any match for this deviant creature who desired nothing but souls and blood and entropy. This machination, this evil intrigue, took us all. And we perished as the light went out and the last feather fell.

Yeah, okay, so this is seriously what happened. Zoë had her first ballet class a few weeks ago. After that, the teacher got sick and cancelled class, and then there was no class because of spring break. So today was Zoë’s second official ballet class. In the first class, she was fighting a cold and hadn’t eaten well. So, naturally, she had a hard time staying on task for the full 45 minutes. The teacher basically asked Mike to take her out for the rest of that session.
Today I explained to Zoë that if she didn’t want to leave class early again, she would need to stay with the class and listen to the teacher. Zoë still remembered having to leave early in the last class and didn’t want that to happen again. Unfortunately, all bets were off within the first few minutes. During stretches, Zoë would flop or roll over during leg stretches. Finally, she just got up and took to running around the room. (By the way, I’ve officially declared mirrored walls to be the natural mortal enemy of 3 year olds.) Because of the way the room and the vestibule outside the room are configured, I didn’t see what happened next, but it was bad enough that the teacher came to get me to deal with Zoë. Through her thick accent and heavily applied perfume, she admonished me to make Zoë listen to her. She bemoaned the fact that Zoë had knocked down the pile of the teacher’s coloring sheets. (They were situated on a floor punching bag. I didn’t see if Zoë purposefully knocked them over, or if it happened on accident while trying to look at them or maybe while she tried to climb on the base of the punching bag.) I apologized, hoping to express my humility and embarrassment, and picked up the sheets. The teacher continued to berate me about Zoë’s behavior and that I needed to talk to her and make her listen to the teacher. At that point I had already apologized and was about to take Zoë aside and talk to her. Annoyed with the level of drama, I pointed out that Zoë is 3. The teacher simply doubled down and snottily told me that all the girls in there were 3.

Don’t get me wrong. The sun, in no way, shines out my child’s butt. I KNOW she can be a handful with her seemingly endless supply of energy. But seriously, what do you expect from a group of 3 year olds? Constant attention and perfection, especially when you’re not really making it fun, isn’t going to happen. Most of the other girls did well, (except for one who had a complete meltdown) but they had also been in structured classes like that before. This was not their first dance class.

So, I did the best I could. I pulled Zoë aside and told her if she didn’t listen to the teacher, we would have to leave and wouldn’t be coming back. I sent her back to the the group with fingers crossed. And, as you would expect, she wasn’t perfect. She made silly faces in the mirror. She tried to climb the mirror with the assistance of the balance bar. When her leg couldn’t physically reach the balance bar, (which all the girls had trouble doing) she flopped down and pouted. But at least she wasn’t disrupting the class. Eh, I guess that’s not totally true. She did disrupt the class for a few seconds when she tried to give her sashay partner a hug. She did try to edge away from the group a few times, but the moment I began to step inside the room she cried No no no! and ran back and paid attention. The rest of the time was fun and she tried. She is definitely not nearly as well-coordinated as the other girls when it comes to skipping, leaping, and tumbling, but she was trying to do what was asked of her.

I guess we’ll try again next week and see what happens. I won’t force something that isn’t a good fit, but I also don’t want to give up right away. She’ll never learn to be in a structured class like that if she isn’t in a structured class like that. If it doesn’t work out, I could always take her to Rachael’s old ballet studio. At least there, the kids learned things while having fun and the teacher knew that ballet for three year olds is really not that serious.