It’s that time of year, the time when the temperature gets hot and women from the mid-Atlantic and northward are expected to don a skin-tight bathing suit and act like that’s normal. For women like me, it’s always been the worst. If you’re not a small person, finding a cute bathing suit that fits usually involves some sort of skirt, shorts, or ruffles to disguise cottage cheese flabbiness. I’m on White Whale 2014 countdown, the end time being when I’m expected to take part in this summertime ritual.

Even though I’m hovering around 250 pounds, I’m not entirely uncomfortable with my body. It is what it is, and there isn’t too much I can do at this point to change it. At long as I have cute clothes that fit, I don’t live in too much despair. That is, until, I’m required to wear the suit of shame. 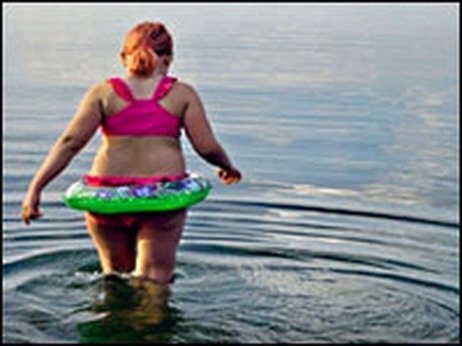 Image from “Moose” by Stephanie Klein

Women watching other women and judging them is our hockey. Even though no one says anything, you can feel the eyes of people watching and silently belittling you because your thighs jiggle with every step you take. You see the faces people make, or the quiet, yet audible gasps when you remove your coverup to reveal just how large your stomach and ass really are. You are frequently excluded from the rounds of, “Oh! Your suit is so cute!” Or, if you are included, it’s out of politeness and pity. I think it’s even harder for me living in Northern Virginia, where everything is so driven by appearances. Most of the women I do know around here are skinny and in shape. Around here, I’m the outlier. It’s this judgment that brings any self-esteem you have to the edge of the diving board to take an inelegant swan dive into the drained deep end of the pool.

And if you’re like me, the thing that makes you want to smack a woman is when they’re skinny, complete with thigh gap, and they complain about having to wear a swimsuit. I honestly had that reaction at first when I saw this Twitter post from one of my favorite bloggers, Jamie the Very Worst Missionary. 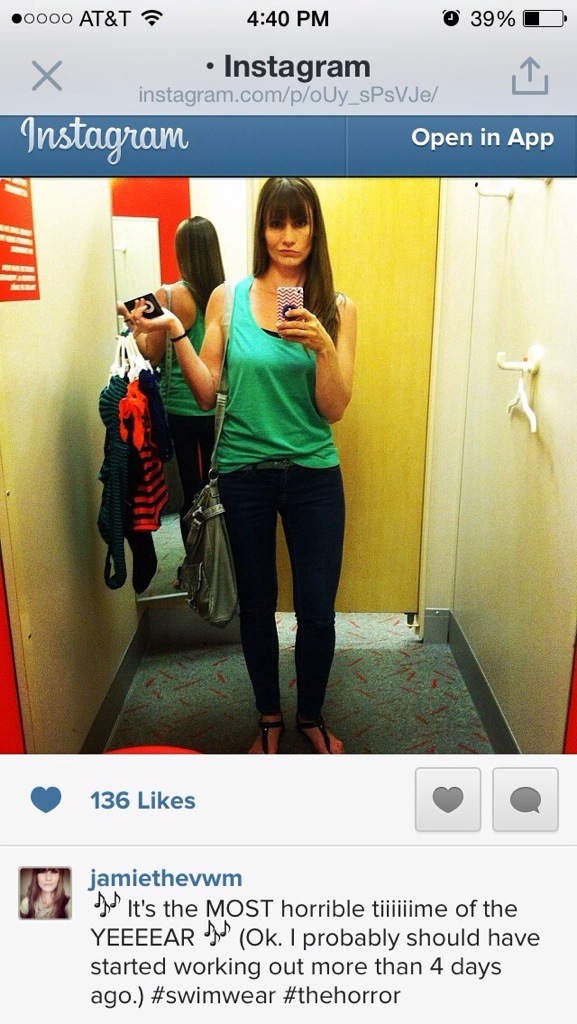 Oh, poor you. You’re trying on suits in an actual store. It must be so hard to try on a size 6 and then be skinny and tan in front of other people.
But that reaction was quickly shut down when I read her following post.

Yay! I’m an asshole. Of course other women have insecurities which are magnified best in spandex. How dare I assume to know her story or anyone else’s stories simply because they’re skinny. Lord knows I wish I could walk around with a hovering sign that explained my story:

I look the way I do now because I’ve been through two pregnancies in which I gained a lot of weight. I lost a lot of that weight, but then I gained it all back because of the medication I take for fibromyalgia. I can’t exercise like I used to because it hurts too much. A two mile walk/run left me in so much pain that I couldn’t sit on the toilet for two days without it being excruciating. My face looks like a teenager’s who wears nightly Crisco masks because of the IUD that keeps me from doubling over as shock waves of pain surge through my uterus and pelvis throughout the month. My feet are completely jacked up because the weight gain has caused my feet to spread and crack. No matter has much I scrub, scrape, or moisturize, these deep cracks won’t go away. It’s like walking on knives.

It really shouldn’t matter what any one of us looks like, but it does. It’s our first impression of people. I just hope that this summer, we lay down our arms: those judgy looks; those purposefully just audible whispers; all of our assumptions…. let’s lay them down and realize there is a story under every person. Let’s just be nice to one another as we parade past each other uncomfortably or pull out half the pool with us upon exiting. And folks, we even need to be kind to the self-absorbed assholes who have Sexy and I Know It playing on a loop in their head as they treat you like dirt. It’s not their fault they’re assholes. They probably had too many people telling them how wonderful they are growing up, or no one informed them that it’s not nice to be an asshole to other people. And worst of all, they won’t get to know the great person you are because they don’t care about your story. It’s physically impossible for an asshole to care.