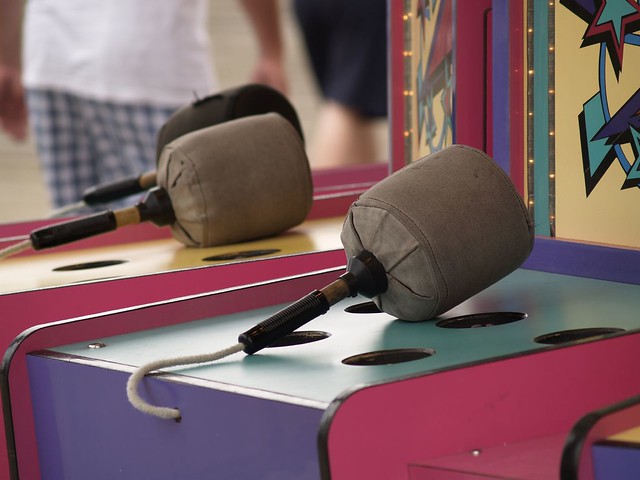 When I suspected, and was finally diagnosed, with fibromyalgia, I thought I knew what that meant. I was going to be in some amount of pain for the rest of my life, along with an extra helping of mind-numbing fatigue. I checked with my Parents with Pain group, and it seems that I am not alone. We were all completely blindsided with various bizarre symptoms. It’s a cruel game of Whack A Mole; different symptoms and disorders pop up when you least expect them. And at times we feel like the moles have revolted, grabbed ahold of the mallet, and start to beat us back.

Image by ccc7ccc at Deviant Art

Here is a list of just some of the bizarre indignities and medical nightmares we fibro people are forced to endure.

Muscle spasms
I think it’s safe to say that everyone has experienced some sort of muscle spasm at some point in their life. They range from tiny twitches in one’s fingers to backs seizing up, because you didn’t have anything better to do that day, did you? In hindsight, I realize that I experienced my muscle twitching years before I even knew that fibromyalgia was a thing. They start small, almost indiscernable, just a thumb barely moving involuntarily. When you try to show someone else, they don’t see it. You feel stupid and they decide you’re an attention-seeking idiot.
But now, there’s no denying the sudden moves my fingers make. Sometimes they keep me up at night. All to often, I’ll have almost drifted off into dreamland, when my index finger decides that it would rather point at my headboard. The stomach spasms are ones I never expected. It feels like being pregnant all over again, or like I’m incubating a tiny kick boxer.
It’s also way too easy for my muscles to spasm and stay locked so that I can’t move. I have literally looked the wrong way at the wrong time and landed myself in bed for two days because moving my neck was impossible without screaming bloody murder. On the plus side, it gave me time to watch and become addicted to Sherlock.

I’m so glad Molly is also sick of my muscle spasms.

Night Sweats/Temperature Sensitivies
Sometimes I wonder if I should just bring a squeegee to bed with me. It doesn’t matter if I’m barely dressed and uncovered, I will still wake up in the middle of the night, drenched. Once I’m able to peel my face off my soaked pillow, I wipe off the small lake that had accumulated between my legs. There are plenty of good reasons to be wet in between your legs. This is not one of them.
To go along with the night sweats, sweating in general has become a thing. My fellow fibro folks have recounted tales of walking from their car to inside of a store and finding themselves turning into puddles. For me, the best part is stepping outside and immediately having a sweat mustache and soaked hair all around my hairline.
We also deal with sensitivity to cold. Along with being in more pain when it’s cold outside, my body has now decided to freeze at 73 degrees like it were 33 degrees in the house. I have heard other spoonies say that heat and humidity make their pain worse. Some of this is due, no doubt, to…

Swelling
The only time anyone should wake up and not feel alarmed by their giant hobbit feet is if they are, in fact, a hobbit. Tight, swollen feet are uncomfortable all by themselves without adding the enormous feat, (see what I did there?) of walking. Normally slender fingers also turn into sausages, making it difficult and painful to engage in normal activities…like picking up a cup to drink.

We can’t stay in one position for too long
One of my spoonie comrades said that if she stays sitting for too long, her tail bone swells. Sometimes with fibro, you just can’t win. If you lay down and rest for too long, it’s murder to get up and put weight on your feet. I have seriously felt like I was in some sort of physical comedy show where they immediately collapse upon standing. It’s so funny that you laugh until you cry….and cry….and cry until you ugly cry so that snot is all over your face and now you have a massive headache and have to try and stand up yet again. Ahem.
So, just don’t lay down, you might say. That’s all well and good, except, after standing for awhile your legs become tired and sore. Perhaps your back also gets in on the action. Soon after, your hips are like, Fuck this, I’m out, and give out on you so that you’re unable to put weight on them, which forces you to limp everywhere.

Neurological issues
Dizziness is pretty common. Fortunately for me, I don’t experience it constantly. But when I do, it is one of the worst feelings. Have you ever seen someone swirl soft serve ice cream or frozen yogurt onto a cone? When I’m dizzy, I feel like I know what it’s like to be that ice cream. I feel a sudden whoosh upward, starting at the bottom of my head and quickly swirling upward, so that my whole head is engaged before it’s over.
I consider myself to be a decently intelligent human being. However, all too often you’d never know it because of how stupid fibro makes a person. As a dear friend used to say, I can’t brain today. I have the dumb. Everyday, we wend our way through thick, goulash fibro fog. Once upon a time we may have been able to organize our thoughts easily. Now, they flutter out in foggy space as we try to corral them with slow-moving nets. We have difficulty finding, (or as I say, making) words. Sometimes we’re like a fibro-ridden Tantalus; words are there, just out of reach, and we are unable to grab them and send them to our tongues. Other times, they completely elude us.

We become hypersensitive to stimuli. Screaming children pierce our eardrums. Too many people talking or things going on at once overwhelm us and make us want to cover our ear, close our eyes, and shut down. Sensitivity to light, smells, and startling events just add to the cacophony of stimuli issues.

Itchy, itchy, ITCHY!
I’m highly allergic to poison ivy. At Rachael’s first birthday I had it so bad that it almost took over my eye. I’ve also been introduced to the misery of PUPPPS. I had it for 20 weeks, (no, that’s not a typo) while I was pregnant with Zoë. Rather than just being confined to my belly, it was all over my body: my face, my neck, my arms and hands, even my butt.
None of this prepared me for the ridiculousness that is fibro itching. Without warning, it will suddenly pounce, sending you on a scratching frenzy. And it doesn’t stay in place. Oh no. It likes to play itchy tag. Now I’m on your leg! Yoohoo! Over here, on your butt. Ooh, I haven’t been to your palms lately. My itch attacks generally strike when I’m trying to go to bed. They also really like to torture my feet, which makes quietly scratching so as not to disturb Mike as he’s falling asleep nigh impossible. I’ve broken the skin from the intensity of my scratching.

Costochondritis
Costochondritis is a comorbid disorder that manifests itself by the swelling of the muscles in your chest. If you’re not familiar with the pain, you will worry that you’re having a heart attack. In fact, I feel like I’m playing heart attack roulette every time I have an episode. I worry that one of these days it will actually be a heart attack that I have written off as costochondritis. Moving and breathing during an episode intensify the pain. Stress also makes it worse. I take prescription strength anti-inflammatory twice a day to stave off the pain. And now I worry that some day my wrecked intestines will bitchslap me for it.

Interstitial cystitis
Imagine feeling like you have a urinary tract infection all. the. time. That’s the awesome that is interstitial cystitis. I feel like I live in the bathroom with the number of times I pee in a day. I just peed five minutes ago, and my bladder is already hurting. I often sit on the toilet for several minutes, just waiting for my body to let it go.

Seriously, you could create a fade time lapse sequence while I sit and wait to pee. First, looking around to see what’s new in my bathroom, (nothing) and deciding if I want to paint the walls a new color. Fade to clipping and filing my nails. Fade to checking Facebook and Twitter. Fade to rage posting something from Jezebel. End sequence with me pushing out the pee like I’m giving birth. Aaaaaand, scene.

There you have it, folks. A not even nearly comprehensive list of all the extra BS we spoonies get to endure along with the pain and fatigue of fibromyalgia. I’ll end it here because I don’t want to bore you to death. Also I have to pee….again.

4 thoughts on “No one ever expects the mole!”