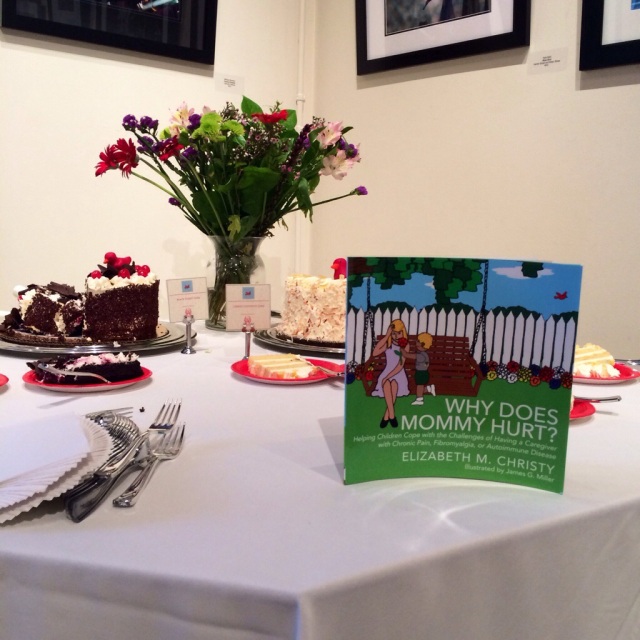 Last Sunday, I had the unique privilege of attending a party celebrating the release of the children’s book, Why Does Mommy Hurt?* Written by fellow spoonie and Northern Virginian, Elizabeth Christy, the book is meant to explain fibromyalgia and chronic illness to young children. While there are books which explain different types of illnesses, and even death, to children, there is a void in the market of books which explain chronic pain to children. The lack of children’s resources on chronic pain is quite astounding when you think about it; over 100 million Americans live with some form of chronic pain, many of whom are young parents.

Megan, over at Megmess, and I decided to go together. (My social anxiety and I sure as hell weren’t showing up alone.) The party was held in the ArtSpace in Herndon. It was an intimate gathering of family, friends, KickStarter backers for the book, and a few of us who took Elizabeth up on invitations to the private event before the public book signing. As petite and delicious hors d’oeuvres were passed, I spoke with other spoonies and met Liz Jones, curator of dullesmoms.com . After some time passed, Elizabeth stood up to give a moving speech about her journey with the book and to thank her supporters. Following Elizabeth was special guest, Jan Chambers. A sort of rock star in the chronic pain world, Ms. Chambers is the President of the National Fibromyalgia and Chronic Pain Association, or, NfmCPA. I shifted uncomfortably in my seat, (sitting up straight and keeping one’s thighs together because they are in a dress is murder!) as I listened to Ms. Chambers give a speech that I had expected: advocacy for the chronic pain community and her own personal story with fibromyalgia. But, then, she spoke about something I did not expect. I did not expect to hear about her experience of role reversal with her children. I never expected to tear up as she recounted how one of her daughters revealed that she didn’t want to take care of her sick mother anymore. I teared even more as she assured us that a goal of just spending one hour a day of quiet, entertaining time with our children was enough. One of the last things I would have ever envisioned was receiving a hug from Jan Chambers upon telling her that I am a young mother and that her words were so important for me to hear that night.

I struggle as a mother to two young daughters. Children are difficult enough to raise as it is without the setback of debilitating pain and fatigue. Sometimes I’m able to engage with them by spending the day with them on an outing or going for a walk. Other days, I’m able to cringe through the pain of being on all fours on the floor so Zoë can have a horsey back ride. Days like Tuesday find me completely useless. I was only able to be awake and upright long enough to take Rachael to and from her acting camp just down the road and to make lunch.
That’s the reason why Ms. Chambers’ words were so important to me. It was encouraging to hear someone, who had lived through the same illness as a young mother, say that I am enough for my children. My girls and I can spend time snuggling, reading, and engaging in the quiet activities that let them know that, even though I’m sick and can’t always do much, I love them and they are important to me. Her words also reinforced my approach to parenting while living with a chronic illness. The last thing I ever want to do is to allow a role reversal and let the girls take care of me. It’s not their job. This illness has already stolen a healthy mother. I refuse to let it steal their childhood too.

Why Does Mommy Hurt? is one of Zoë’s favorite books. Admittedly, I have used the book to help remind her to be helpful and perhaps calm her Snacken tendencies. I learned just how much Zoë had identified with the book when I asked her to be my helper one day. Her reply referenced Elizabeth’s son in the book.
“Just like Jimmy?” she asked.
“Yes. Just like Jimmy.”

*The book is also available in Kindle format.

7 thoughts on ““Why Does Mommy Hurt?” party”