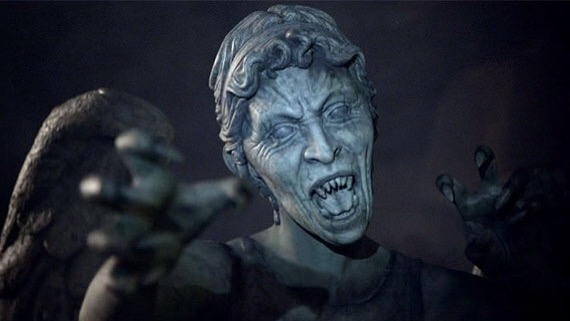 Today I took Zoë to the local party store to get costumes for she and I. She wanted to be Sheriff Callie from the Disney Junior show and I wanted to be whatever they had in stock that would fit me. We wended our way through aisles of everything one would need to be a zombie, a school girl, a vampire, or make it look like you have an axe lodged in your head. Much of the conversation I had with Zoë while in the store consisted of her asking what something was and me replying, “An axe; chainsaw; sledgehammer; bloody sword; pitchfork; etc.”
Once we finished gathering things for Zoë, my attention turned to the back wall-o-costumes. I had already looked at things online to see what was available in plus sizes. I had planned to pick up a Wonder Woman costume to surprise Rachael, as she’s been begging me to dress up as WW since last year. Unfortunately that wasn’t available in the store, so I had to spend the next several minutes searching for what was in my size and whether or not I wanted to be seen in public dressed that way. As I looked, I not only noticed how few plus-sized costumes were available in the store, but how few of them weren’t a sexy version of whatever. You know: sexy nurse; sexy cop; sexy candy corn…the usual.

Halloween and dressing up weren’t big things for me growing up, as I wasn’t allowed to go trick or treating. So I’ve never really bought a costume to dress up for Halloween. Of course I was aware of how sexualized costumes were at Halloween. It’s the one time of year people can wear their inner tramp and it’s not a big deal. In fact, it’s encouraged. And there is absolutely nothing wrong with dressing in a way in which you feel comfortable and sexy. If you want to be a buxom bar wench, a flirty cheerleader, or a sorceress who uses more than her spells to enchant others, go for it! But as I looked at the website, and later stood in front of the wall, the culture of hyper-sexualization and sexual objectification became apparent.

My first eye-opening moment came several weeks ago as I browsed through the children’s costumes on Zulily. (I’m setting aside my aggravation with the discrepancy between “girls costumes” and “boys costumes”.) While there were a few objectionable costumes I came across for young girls, the above costume just made me ragey. Not only was the costume absolutely nothing like an actual military uniform, it goes as far as to sexualize a young girl with the short skirt and long gloves. And Major Flirt? What a “brilliant” joke that demonstrates a total lack of respect for girls.
The more I looked, the more I discovered that this wasn’t just a one off sort of deal. Groundwork is being laid for these girls so that either, A) girls/women will want to wear sexy or demeaning costumes when they get older, or B) girls/women will see those type of costumes as normalized because that’s pretty much all that’s available once they’re older. Examples? you ask. Okay. Let’s start off with Alice in Wonderland. Pretty straightforward, right? Simple blue dress, white apron, blonde hair with a black bow headband.

They’re all pretty much the same costume, with the small change of Alice suddenly becoming a Bavarian milkmaid in adulthood. The changes are subtle as the girl who is supposed to be wearing the costume ages. We start with a toddler who, for some reason, is pouting. The next girl has fingerless glove sleeve things because reasons and is pouting even more. Then we have teenage “Clever Alice”. The skirt shortens and the tights change to the pattern we see in adult Alice. 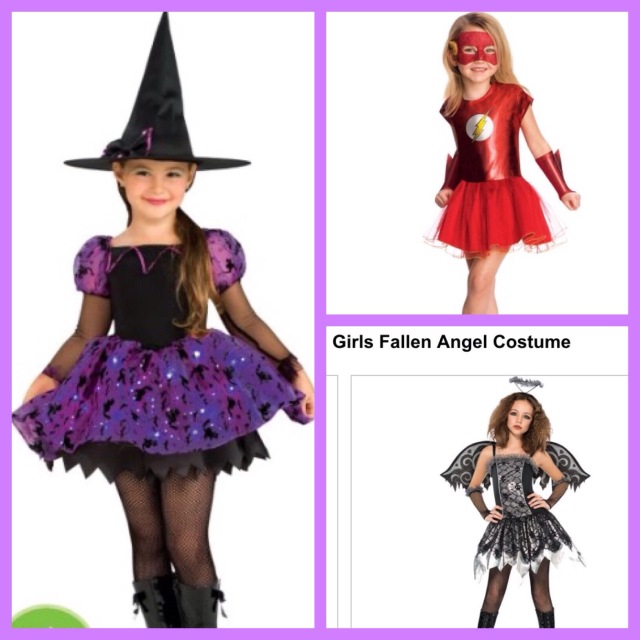 It’s not just Alice, though. Why must the witch’s skirt be that short? The last time I checked, The Flash didn’t wear a skirt. And how is the fallen angel costume appropriate for a young girl? I really don’t think that “fallen” is meant to imply that she missed stepping on the next cloud because she was too busy with her harp playing. I don’t have any problem with the costume itself, but a young girl has no business wearing something with sexual overtones.

Can someone please explain this to me? I’m really curious to know how we’re supposed to know that these girls are dressed as TMNT Michelangelo. The only things that really give it away are the turtle shell purse and nunchucks. Everything else, from the skirt to the way the nunchucks are being held, are just subtle ways to suggest and indoctrinate girls with the thinking that this is really what girls ought to be wearing for Halloween. After all, we wouldn’t want girls to be dressing up as anything empowered that can kick some ass. (Yes, I know they’re fictional characters. Just stay with me here.) Rather, we want the sweet, tractable girl who stands there with a look on her face that says, “Oh, nothing.”

Still think I’m reading way too much into this?
BOOM. 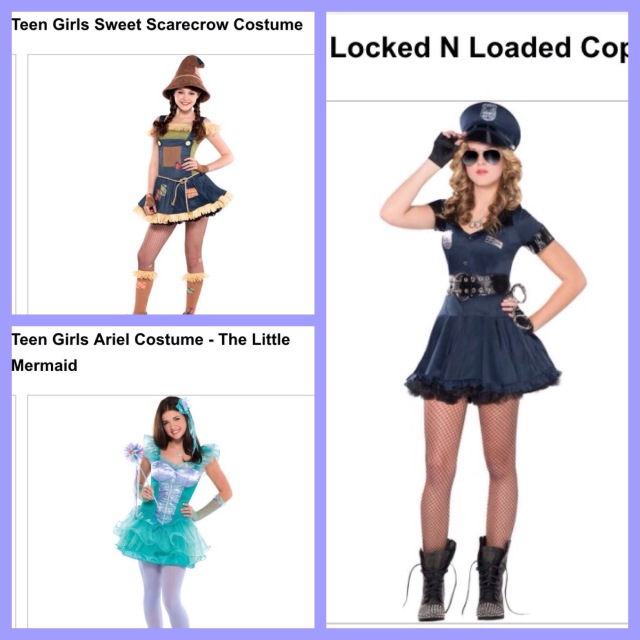 What was once perhaps sweet and innocent for little girls is now creeping its way into the teenage costumes. The only thing that would suggest that the “scarecrow” costume is as such is the hat. Otherwise, to me, it looks more like a suggestion to roll in the hay. And on what planet is that an Ariel, Little Mermaid costume? They have to give her a fucking wand with Ariel’s picture on it so you can tell. And then there’s the sexy police officer who you are more than willing to let lock you up and frisk you. Sound creepy talking about a teenager that way? It’s because it is! I saw a similar “sexy cop” costume for little girls as well. It’s practically grooming behavior, getting these girls to believe that dressing in a sexy way is normal and expected.

When I grow up, I want to be a sexy gypsy
When I chose my major in college, I don’t recall the sexualization of a discriminated ethnicity being an option. Yet, there it was: Sexy Gypsy, categorized under the “Careers” tab on the website. It was among the other careers that girls all over the world have to look forward to once they’re older, like nurse, firefighter, and airline pilot. Unless you live under a rock, I don’t think I have to show you what those costumes looked like. I expect the fantasy costumes of the hot nurse or the female firefighter who starts more fires than she puts out. But I ask you, what does it say to women, and how they are viewed in the world, when the following were…and I shit you not…the only options listed under the career tab along with sexy gypsy.
Mile High Captain
Ms. Blazin’ Hot/Babe/Hottie Firefighter
Bustin’ Out Prisoner
Sexy Astronaut
Nun (regular and “blessed babe”)
Sexy Fortune Teller
First Aid Flirt
Frisk Me Police
Sassy Ringmaster
Big Top Tease
Man Stealing Maid
Rosie the Riveter

These options really reflect a high opinion of women and what the costume-makers believe they’re good for, no? Any sort of dignity related to careers like nursing and astronaut is completely stripped away.
Wait! you say. Rosie the Riveter is a symbol of the strength of women during the war, a foreshadowing of what is to come in women’s lib and the change in America’s workforce! That’s a great costume!
Normally I would agree with you. But it’s difficult to maintain that belief when the actual costume looks pretty similar to a pinup girl with a Rosie name tag on the shirt. So many costumes that would otherwise be great costumes are perpetually ruined by making them sexual. Below are my favorites.

I file these under the “Why? Just….why?” section in my head. They even had a sexy gnome costume. A sexy. fucking. gnome. I think I could probably delete everything I’ve typed thus far and just present that costume as my argument.

Aren’t you just slut shaming?
No. I don’t blame the women for wearing these costumes. As I said before, if a grown ass woman wants to wear a sexy costume, that’s their decision and I’m happy to support that. If you feel “30, flirty, and thriving”* in a french maid costume, that’s awesome. If you feel 50, foxy, and fine as a sexy sailor, good for you! If you feel 80….great-y…. Nothing rhymes with 80. If you put on the slave Leia costume because you’re going to a party full of geeks and you’re out to get some, you go out and get it! Please just keep in the back of your mind how so many of these costumes are perpetuating a culture of not taking women seriously and treating them as sexual objects. Most of these costumes are designed for the male gaze. And it’s fucking creepy that it starts in costumes for little girls, so that by the time these little girls become adults, it’s simply “normal” and accepted for women’s Halloween costumes to be sexual in nature. Take that to the next step: our culture has been pretty successful in duping people into believing that, if the woman is raped while wearing the sexy costume, it’s her fault because she was asking for it. And that is fucking terrifying.

2 thoughts on “The scariest part of Halloween”