This is the final part of a 5 part series about my experience, as a spoonie, vacationing at Disney World. Here are parts 1, 2, 3, and 4.

I discovered that my love for roller coasters has become tainted. I’ve never been one for the most adventurous rides, but I do love a good zero to OMGWHEEEEEEE! with the upside downs and sharp banking. So it was disheartening to find that I was really going to have to suck it up and take some real pain if I wanted to ride the coasters at Disney. (And the ones I rode at Universal Studios at the conference block party. Consider wearing body armor if you’re going on Transformers or the Minion rides.)

The first coaster we rode was the Aerosmith RocknRoll coaster. First of all, holy crap on a cracker, y’all! I think that coaster would have been rough, even without the fibro. It was pitch black for the first 10+ seconds of the ride. I made my throat sore, screaming for my life during that coaster. It ended up being fun, but holy shit was it rough on my neck. The same is true of Star Tours, Everest, and Space Mountain. All a lot of fun, but are murder on the neck and back. The new Seven Dwarfs Mine Cart coaster was fun and much easier on the neck. It didn’t leave much room for my legs, which made for a lot of pain around the curves, as my legs and knees mashed into the lap bar.

Ultimately I would have been sad if I had let my fibro be in charge and hadn’t gone on any of these rides, but the price is pretty steep. I said “shit” and “fucking ow” as much as I laughed and said “whoo”. Drug up in advance, people!

Line up, everybody!
After my experience of standing in line for Soarin’, I wanted nothing to do with standing in any line for very long. If we couldn’t fast pass something, or the wait was longer than 30 minutes, we just didn’t do it. We did a fast pass for the Aerosmith coaster, so not a big deal. We hit a big snag in our plan when we arrived at Everest at Animal Kingdom. No fast passes were available, and waiting in line was going to be almost an hour. But then, an awesome cast member at the fast pass kiosk told us about the single rider line. It’s one of the few rides in Disney where you can get in a separate line if you’re planning to ride by yourself. You become a seat filler with the odd numbered parties who all want to go together. Mike and I ended up on the same coaster, just different cars, and only waiting about 10 minutes! I’ll be honest, when we started going backwards in the dark, I wish I had had Mike’s freckled arm to squeeze until his arm would break. But overall, it was really fun and we were able to cross that coaster off our list.

At the new 7 Dwarfs Mine coaster, waiting in line for an hour was just fine because I had my wheelchair by then and the line was wheelchair accessible. But, as is the case with many older buildings and walkways, Space Mountain’s regular stand-by line is not wheelchair accessible. So a cast member directed us to the fast pass line to get a return time, as the new fast pass line is wheelchair accessible. I think they wrote the time down wrong. Rather than an hour wait, we only waited 15 minutes. Make sure that whomever is pushing you up and down the steep angles the fast pass line takes is in peak physical condition. Mike was a trooper, hoofing it up those inclines and preventing me from become the physical comedy trope of a person in a runaway wheelchair on the downward slopes. At one point, the rubber grip on one of the handles came off while going downhill, which made things interesting. After we managed to avoid fiery collision, Mike parked me and went back up the line to find it. It’s terribly awkward to be sitting by oneself next to a line of other people. I should have started quacking to emphasize my current state and make everyone feel better.

After our arduous journey over hill and dale for many a fortnight, depleting our skeins of Tang and supply of freeze-dried lembas bread and limbs quivering from all that they had to endure, we finally reached a place of rest on the Mountain of Space. There we found rest from the kind mountain villagers, who prepared us for the next phase of our fantastical journey. We hobbled toward the space pod, which would carry us to our destination, only to find our path blocked. Downcast though we were, we found comfort in the continued care of the villagers. The town crier regularly took to the village main square to announce how the work to clear our way goeth. As I rested in my transport, I felt the growing unrest from a faction of villagers. I worried that their dismay would turn toward me. After all, had I not walked from my transport to the space pod? Had we not taken our place in line before those who had waited what seemed like lifetimes? But we stayed the course, stalwart and sure, for the road had been hard and our journey far.
But what to my great joy when the town crier sent forth word that the way was open and our journey into the stars was to recommence! Into our pods we settled; such great anticipation leaving all aquiver. We began, and the wind blew my hair. I felt the chill of dark space fill my nostrils and promise thrills beyond imagination. 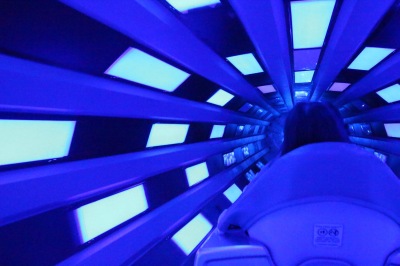 Suddenly, cool, blue light flooded the sky. We were enveloped in the beacon that was foretold, the beacon that would let all who passed know that their hard work could be put to rest. It was time for the prize for which we had waited so long.

And then we zoomed around in the dark. It fucking hurt, but damn it was fun.