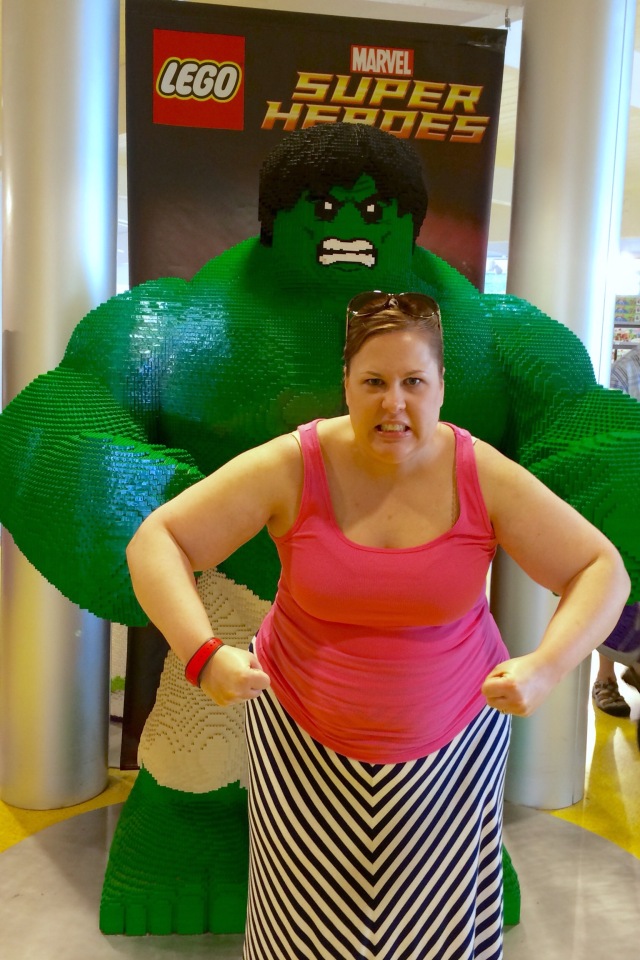 I’ve never been one to love exercise.  Once we moved back to Virginia at age 7, I was given Twinkies and discovered the Disney channel; going outside to play was no longer at the top of my “to do” list.  I played softball for one disastrous season where the coach hardly ever showed up, but wasn’t otherwise involved in organized sports.  I preferred reading or playing the piano.  I have always been one of the kids that only made it through the first half of the first lap, (out of four) on the mile run before having to stop and walk.  Consequently, as I’m sure you can imagine, I was always on the chubby side.

Finally, I got sick of it.  Enough was enough; clothes weren’t fitting and I was tired of getting winded from fairly simple tasks.  I began Weight Watchers and going to aerobics with strength training.  I lost weight and inches and toned various problem areas.  I wasn’t “skinny”, but I was at a place where I was happy enough with my body and fitness level.

Me, at my smallest

I was heartbroken when I had to discontinue aerobics, with the realization of fibromyalgia setting in and the toll one aerobics session took. While I can cut calories, my body has always been very resistant to shedding pounds without exercise.  As I’m sure I’ve mentioned on here before, doctors will repeatedly tell fibro patients that they must exercise to feel better.  And, as I’m sure I’ve mentioned on here before, my immediate reaction is to want to punch those doctors in the throat.  I knew they were right, but it’s difficult to exercise, (yes, even to walk) when the exercise programs are not built for people with chronic pain.  I decided that my inability to exercise was bullshit, and attempted to work with others to create such a program.  Unfortunately, the person on whom I was placing most of my hope, used me and my idea to complete her senior independent study, strung me along for months, and then left me hanging out to dry once she graduated college.

On the plus side, I’ve been able to keep up with physical therapy, which includes aqua therapy.  In the pool, I am able to perform exercises, like squats, better than I ever could on land.  The exercise doesn’t affect my weight, but my strength is much improved, which helps me tolerate the pain a little more.  My therapists remind me than I’ve come leaps and bounds from where I began, (in the beginning, I was worn out after 5 reps of tightening my core) but I am still frustrated.  It’s difficult to push from my mind that I was once capable of so much more.

The thing that has really stirred anger and aggravation in me lately are the motivational exercise videos and pictures various people post or like on Facebook.  This morning, I watched a video of two women about my age, working out.  As I watched, I settled into what felt very much like jealousy.  I coveted the ability to perform the motions their bodies performed easily.  I wished I still had the ability to squat.  I envied their ability to jump like them, their feet leaving the floor effortlessly.  I felt like a kid excluded from a club as they executed burpees.  Yes, as first brush, it was clear to me that my annoyance stemmed from jealousy.  As I wallowed in my jealousy, I noticed words of bargaining intruding.  If only I didn’t have fibro, I would push myself and exercise like this.  Now that I know what I’ve lost, I wouldn’t take my body for granted again.  And that’s when it hit me: I’m not jealous.  I’m grieving.

I want you to think back to a time when someone ridiculed you because of a fear you had, (or still have.)  Perhaps it was a fear of flying.  A fear of spiders.  A fear of heights. A fear of small spaces.  A fear that something might happen to your children.  How did it make you feel, to have someone minimize what you felt was a legitimate fear?  Not too great, I’d imagine.

I’m sure Facebook has made you aware of the number of shark attacks that have happened off the coast of North Carolina this summer.  Last year, there was a reported total of 4 shark attacks in North Carolina in 2014.  This summer, seven 8* occurred in less than a month.  The first two were explained away, but as the attacks began trending southward and more violent, I began to get worried.  (Even scientists are all WTF!?!)  You see, we’re getting ready to head down to Emerald Isle, in the Southern Outer Banks, soon.  The 7th and most recent attack at Ocracoke is only about two hours away, and that is when I declared that there would be no swimming in the ocean this year.  While that will make our vacation a little less fun, (and peeing in the ocean inifinitely more difficult**) I feel that a shark taking a chomp out of me or my family would really put a damper on things.

Apparently, I’m a ridiculous human being.
Once news of the shark attacks began circulating on social media, several people fought to stem the tide of panic in the only way social media could: infographics.  Although I don’t typically frolic with cows, I have been informed that I’m statistically more likely to have death by cow.  And, honestly, the next person who says I’m more likely to be struck by lightning is going to get punched in the throat.  I’m pretty sure that the last gentleman to be attacked stood out past the breakers, saying to himself, I’m more likely to be struck by liiiiiiiaaaauuuuuuugh argh bargh thrash splash haaaaaaaaaaaalp!  That’s the thing about statistics- statistically unlikely doesn’t mean there’s a 0% chance.  And people are paranoid, only until it happens to them.  I don’t need to get in the ocean that badly; I don’t need to take that risk.

We then turn to the newest infographic in circulation, which treats fear of shark attack/unwillingness to swim in the ocean as a character issue.

While I understand that it is using the shark attacks to draw attention to violence against women, it’s also creating a straw man which trivializes fear of a shark attack.  Believe me, this ball of anxiety is perfectly capable of multi-tasking.  I can focus on more than one fear at a time.

Getting to the Point
Ultimately, what I’m trying to say is that those of you who say that my fear is irrational, (which was said to me at a wedding two weeks ago) and post these infographic responses, (because apparently being irrational also means I’m dumb and need to see a pretty picture to understand?) are kind of being assholes.  If you feel comfortable swimming in the ocean this summer, then go for it!  I’m certainly not going to judge you for deciding that the risk is low and reasonable.  May the wind be ever at your back, may sharks prefer bait fish to you, and live every week like it’s Shark Week.

But, please, let the rest of us have our fear and respect for these great and creepy creatures.

Side note: Don’t tell me those motherfuckers aren’t creepy.  You know when you’re looking at them swim in aquariums, those cold, dead eyes are looking at you, thinking, I own you, motherfucker! in their creepy Vincent Price voices.

If you’ll allow me, sharks don’t swim in my kitchen so, this year, I’m going to stay out of theirs.  I know that sharks are wild animals who are mostly peaceful and usually bite out of curiosity.  And, sometimes, some sharks behave like assholes.

*Mike just told me an 8th attack occurred Saturday in Surf City, which is even closer to Emerald Isle.

**Anyone going, Ewwwww! You pee in the ocean?– You’ve done it too and you know it!  And if you deny it, you’re a lying liar.