2016 has had the most bizarre and fucked up election cycle I’ve ever seen.  My fellow Americans and I have had an unusual amount of anxiety over this election, particularly over Donald Trump, to the point where therapists have seen an uptick in their appointments, specifically because of election-induced stress. I didn’t plan on voting Republican this year, but I at least like the other candidate to be a competent choice and not of complete moral turpitude.  So I’ve gone through the stages of grief as I’ve watched the Republican party self-immolate this primary season: Denial; Schadenfreude; Rage laughing; Anxiety; Stress wining; Depression; finally Acceptance.  So now a circus peanut with candy floss hair is the de facto Reoublican nominee, and I’m scared shitless.

Picking my candidate
When I first heard the things Bernie Sanders had to say, it felt like such a relief!  Thank goodness, someone gets it!  He preached the gospel of family leave and equal pay for women.  He drove home the reality of our country’s economic inequality.  He wouldn’t let us forget how far behind other similarly developed countries we are on education and healthcare.  Unfortunately, the more I listened to him talk, the more I realized he wasn’t my guy.  His message was inspirational, but his policy initiatives weren’t exactly what I wanted and they didn’t seem very plausible, especially in the current political climate.  Even if I wanted a single payer healthcare system run by the government, (which I don’t. They can’t even run the VA well.  Why would I want them to administer my healthcare?) how would Sanders even get that passed in Congress?  Let’s even assume that the Dems take back the House and the Senate in 2016.  There are likely to be plenty of Blue Dog Democrats who wouldn’t fall in line on this.  It was hard enough getting Obamacare.  America’s not ready and willing to slog through another complete healthcare overhaul.

I watched almost all of the primary debates, on both sides.  As I watched more of the Democratic debates, I kept yelling at the tv, “Super!  How do you plan on doing that?  What’s your plan B if you can’t close all the tax loopholes for the 1%?”  The two biggest red flags for me were as follows:

1) During the CNN debate, when asked about specifics in foreign policy, Sanders looked like a deer caught in headlights. It was aggravating to watch as Anderson Cooper asked straightforward questions, Sanders couldn’t answer them, and then pivoted back to the only foreign policy message he had- Hillary voted for Iraq.  War is bad.

2) The interview Sanders had with the New York Daily News Editorial Board revealed that he didn’t actually know the legal process by which he could dismantle the big banks, something I feel like you should probably know if you’re going to promise to do that.

These two instances confirmed for me what I had wondered about his campaign promises and whether he could actually make good on them.  To me, they revealed that, no, he doesn’t actually know.  He has no fucking idea.

Image via the Clinton campaign

Hillary Clinton isn’t a perfect human being.  I can even understand why people don’t like her.  She isn’t always consistent.  Sometimes she does bend the truth or lie, depending on her audience.  (Yes, I’ve seen the Anonymous video of her lying for 12 minutes.  I’ll accept it when it’s objective and not pure anti-Hillary garbage.)  Republicans do always seem to be investigating her, even though they can never seem to turn up anything legitimate with which to charge her.  And she doesn’t necessarily give people the warm fuzzy, hopey changey, glowy feeling that we all got in 2008.  Whether anyone realizes it or not, I’m sure a good deal of the animosity toward her stems from the Republican’s hatred of the Clintons in the 90s.  As much as people hated Bill for being unable to keep his cigars in their boxes, they couldn’t stand a First Lady who wouldn’t just sit down, shut up, and review the seating chart for the State Dinner for the British Prime Minister, like a good little First Lady should.  I’ve also heard plenty of people holding Hillary accountable for Bill’s personal and political mistakes.  Let’s not fault her for the things her husband did, nor, without investigation, the things he asked her to lobby for on behalf of the administration.  And for fuck sake, stop calling her evil.  She’s not evil.  Get your head out of your ass.

Hillary has the experience in government and the competence to be President.  Even people who don’t like her will admit that.  I believe her policies and how she plans to implement them are more in line with what America can handle.  After all, she’ll be President of all Americans, not just the ones on the far right or left.  Hillary’s agenda is in line with my priorities: economic equality and opportunity; equality for women in pay, healthcare, and life in general; criminal justice reform; gun control; immigration; education; foreign policy/diplomacy first, but not afraid to use our military.

Speak
I’ve generally kept my mouth shut up until now because most of my friends feel the Bern.  And that’s fine.  I don’t agree with everything, but I respect that choice.  I would occasionally ask questions or push back if I genuinely didn’t understand something someone said or posted, otherwise I felt it was best to stick to common ground and trash Drumpf.  But now that Trump is the Republican nominee, I can’t keep it in anymore.  I don’t understand the Bernie people who won’t vote for Hillary in the general election, just to keep Trump out of office.  If Bernie somehow ends up with the nomination, fair and square, I’d vote for him in the general.  In any other election, I could understand and respect the “voting my conscience” principle.  But not this time.  Trump isn’t just some jackass who would make things suck and laughable for awhile.  Trump would put our economy in danger, ($10 says markets around the world plummet the day he’s elected.)  He would put our safety and the safety of our allies at risk.  His election would tell the world that it’s just fine to denigrate women, other religions, other races, the disabled, and anyone else who gets in the way.  He has already fanned the flames of race wars and encouraged violence as a way to solve differences.  For fuck sake, he’s hired Paul Manfort as one of his key strategists.  Paul Manafort is the guy who genocidal dictators have hired to help improve their image.  Trump, who is supposedly so wonderful because he’s been self-financing, (which isn’t technically true) has hired Steven Mnuchin as his National Campaign Finance Chair.  You may better know this “gentleman” as one of the investors who bought Indymac Bank when it collapsed, paid virtually nothing for it, got the federal government to continue shouldering the responsibility for the bank’s losses, and then made billions in the following years from the restructured bank.  Oh, and did I mention that they still foreclosed on thousands of people’s homes?  Jesse Benton, the man who was running the Trump super PAC, Great America, was convicted yesterday on several counts of fraud from when he worked on the Ron Paul campaign in 2012.  Trump’s campaign manager, Corey Lewandowski, thinks it’s totally cool to physically assault female reporters.  So….these are the sort of people Trump surrounds himself with.  How does that not scare the shit out of you?   Not to mention all the insane, let’s call them policy proposals, for lack of a better term.  I’ve heard people say, “He doesn’t mean what he says.  When he says build a wall and make Mexico pay for it, he really means he just wants to implement some mild tax cuts and tweak portions of our trade agreement.”  Denial!  Denial with a massive amount of projection of their own policy ideas.  I guess it’s okay, though.  Denial is only the first stage.  I’d be happy to recommend some wines once you get to the stress wining stage. 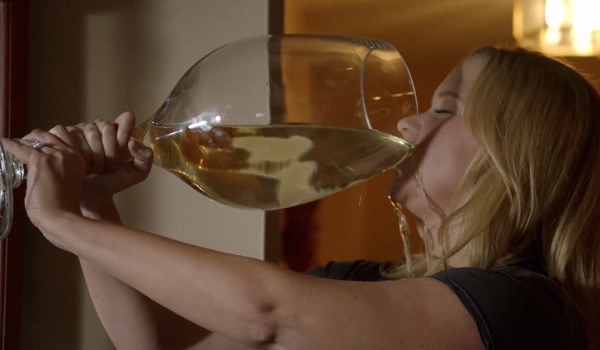