For the first time since Rachael began school, they had an assembly that included an emphasis on a dress code. Rachael informed me that any tank top had to have a two finger-width strap. An abridged Rights & Responsibilities packet that was more for kids came home, and a section specifically addressed dress code. There was nothing in it that set off alarm bells for me: cover your tummy and underwear; no inappropriate logos or swearing; wasn’t divided into a boys section and girls section. So it hasn’t been a problem, until this morning.

Today, Rachael put on a dress that she has worn to school countless times. It is the dress seen above: a halter-style dress with spaghetti straps. 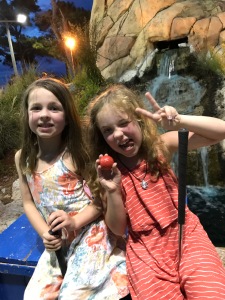 Here it is again, making you feel uncomfortable because a 9 year old is showing off so much shoulder.

If it were inappropriate for school, I wouldn’t let her wear it. As we were walking out the door to the bus, Rachael stops, with an awful look of sudden realization on her face.
“Mom, these straps aren’t two inches!”

There wasn’t any time to change, (and even if there were, I still wouldn’t have made her change.) So, now Rachael is going to be focused on worrying that she’s going to get in trouble for violating the dress code, rather than focusing on learning. I’ve at least raised her well enough to be indignant about the fact that the reason for the dress code rule is so too much skin isn’t showing.
“That’s ridiculous!” she railed. “As long as you’re covered and there’s nothing hanging out, it’s fine!”

I told her that if she did get in trouble for some reason, that she had my permission to wear the dress and that I would get in someone’s face. Still, I know that her joy of making a cookie map of Virginia today has been slightly tainted by the fact that the school has made her self-conscious about what she’s wearing.