I’ve never been one to love exercise.  Once we moved back to Virginia at age 7, I was given Twinkies and discovered the Disney channel; going outside to play was no longer at the top of my “to do” list.  I played softball for one disastrous season where the coach hardly ever showed up, but wasn’t otherwise involved in organized sports.  I preferred reading or playing the piano.  I have always been one of the kids that only made it through the first half of the first lap, (out of four) on the mile run before having to stop and walk.  Consequently, as I’m sure you can imagine, I was always on the chubby side.

Finally, I got sick of it.  Enough was enough; clothes weren’t fitting and I was tired of getting winded from fairly simple tasks.  I began Weight Watchers and going to aerobics with strength training.  I lost weight and inches and toned various problem areas.  I wasn’t “skinny”, but I was at a place where I was happy enough with my body and fitness level. 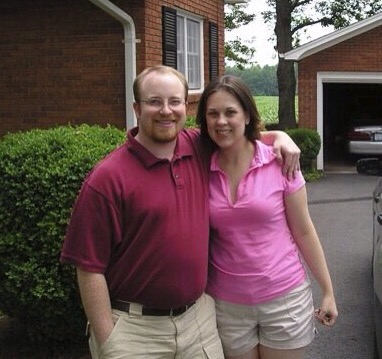 Me, at my smallest

I was heartbroken when I had to discontinue aerobics, with the realization of fibromyalgia setting in and the toll one aerobics session took. While I can cut calories, my body has always been very resistant to shedding pounds without exercise.  As I’m sure I’ve mentioned on here before, doctors will repeatedly tell fibro patients that they must exercise to feel better.  And, as I’m sure I’ve mentioned on here before, my immediate reaction is to want to punch those doctors in the throat.  I knew they were right, but it’s difficult to exercise, (yes, even to walk) when the exercise programs are not built for people with chronic pain.  I decided that my inability to exercise was bullshit, and attempted to work with others to create such a program.  Unfortunately, the person on whom I was placing most of my hope, used me and my idea to complete her senior independent study, strung me along for months, and then left me hanging out to dry once she graduated college.

On the plus side, I’ve been able to keep up with physical therapy, which includes aqua therapy.  In the pool, I am able to perform exercises, like squats, better than I ever could on land.  The exercise doesn’t affect my weight, but my strength is much improved, which helps me tolerate the pain a little more.  My therapists remind me than I’ve come leaps and bounds from where I began, (in the beginning, I was worn out after 5 reps of tightening my core) but I am still frustrated.  It’s difficult to push from my mind that I was once capable of so much more.

The thing that has really stirred anger and aggravation in me lately are the motivational exercise videos and pictures various people post or like on Facebook.  This morning, I watched a video of two women about my age, working out.  As I watched, I settled into what felt very much like jealousy.  I coveted the ability to perform the motions their bodies performed easily.  I wished I still had the ability to squat.  I envied their ability to jump like them, their feet leaving the floor effortlessly.  I felt like a kid excluded from a club as they executed burpees.  Yes, as first brush, it was clear to me that my annoyance stemmed from jealousy.  As I wallowed in my jealousy, I noticed words of bargaining intruding.  If only I didn’t have fibro, I would push myself and exercise like this.  Now that I know what I’ve lost, I wouldn’t take my body for granted again.  And that’s when it hit me: I’m not jealous.  I’m grieving.