Now that Rachael is off to school, Zoë and I will be settling into our new weekday normal. Meltdown aside, Zoë’s been handling the separation pretty well. She asks where Rachael is every once in awhile, talks about Rachael being on the bus, and has become a bigger attention lady of the evening, but is pretty calm otherwise. The Target bribery helps, I’m sure. 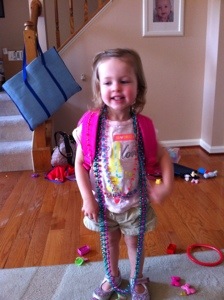 Zoë naps for a couple of hours in the afternoon and will get up around the time we need to head to the bus stop. I realize these two hours will be spent in a mad dash to oh my god, get everything done as quickly as possible while she for the love of god, please don’t be giving up naps yet!
I know this extra time is going to allow me to focus on some other things I’d like to do/achieve.

1) Blogging
I feel like blogging has been really good for me. Since I began a few weeks ago, I’ve felt happier and like I have more purpose.
But Julie, you have children. Shouldn’t they be your end all and be all? Your entire life should revolve around them and making sensory bags and homemade play doh rather than letting them watch tv. And something about quinoa. Because if you’re not going to do all that, why did you have children in the first place?
First of all, fuck you and the horse you rode in on, imaginary composite of judgy people. Second of all, I have made homemade play doh, so suck it.

Thirdly, I was someone with hopes, likes, and dislikes before I had children. Those don’t cease to exist simply because I pushed two babies out of my vagina. (Although, I’m fairly confident my hope of ever having a quasi flat stomach again came out with the placenta.) I feel like I’m able to connect with others with my writing. For the first time in awhile, I’m allowing myself to be me. It’s a really peaceful feeling, and I want to continue that. I’ve told Mike that, while it would be nice if others were reading, I would continue to write for me even if they weren’t.

2) Cooking
Part of the plan has always been to include some of the things I cook/bake in the blog. I have had people tell me before that I should do a food blog, but I brushed off the notion because I didn’t feel like what I was putting out there was pretty or original enough. The more I thought about it, though, the more I realized that I didn’t just have to blog about perfect triumphs. I could make messes and epic culinary disasters and document it all, bringing people along the way and, hopefully producing some quasi original yumminess.

3) House projects
We bought our house as a foreclosure almost 5 years ago. Fortunately, most of the improvements it needed were cosmetic. (Seriously, we’re talking communist red in the stairwell, next to a melon living room and sunshine yellow upstairs hallway. The paint job alone has been epic.) Unfortunately, Mike and I are lazy, have two kids and finite resources. So, like most homes, there are any number of things that need to be/I would like to have done. So I plan on spending some time this fall on Pinterest, (the most reliable source of ever!) This Old House, and any number of DIY sites in order to tackle some projects I’ve been waiting to do for a long time. The first is painting or re-staining a table that was given to us. It’s in great condition structurally, but it is over 25 years old and was a thrift store find. So it needs a little TLC. Here’s hoping I’ll be able to make it look great and not want to scream and just throw it into a bonfire when I fail. I don’t think it would go over well with the HOA.

4) Physical health/exercise/eating better
I’ve struggled with weight all my life or, at least, since I moved to Virginia as a child and my grandmother introduced me to Little Debbie, HFCS, and saturated fats. Mmmmmm, saturated fats. I have found that with exercise and eating right, I am able to lose weight. (I know, it’s shocking. It’s almost like all those quick fix solutions are complete bullshit.) However, after having Zoë and with aging, it’s infinitely harder. (Suddenly, I hear the whispers of every middle aged woman ever saying Fucking duh!) Add hypoglycemia and fibro to the mix, along with Lyrica making me gain 20 pounds and want to eat every piece of food ever, and we have a perfect gunt cocktail. But I need to suck it up and do better. I do, for the most part, eat a well balanced diet. And then I go and totally tip the scale with these.

So now I need to find the balance between self-denial and Jabba the Hutt. I need to make myself do small amounts of exercise consistently, (not only for the weight loss, but for easing fibro pain.) I need to not feel defeated before I even try…again…for the 5 millionth time. But sometimes, as you think about eating crap, all you hear in your head is