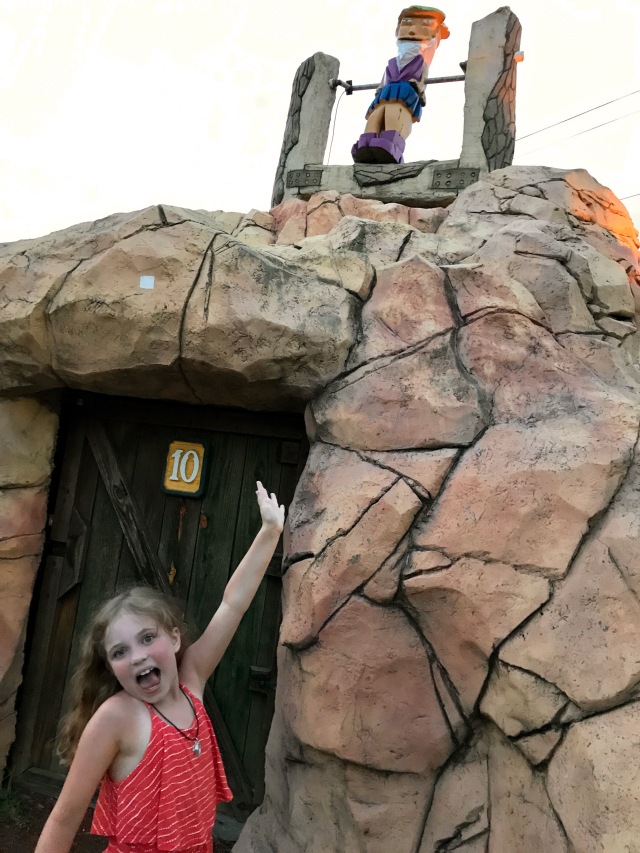 For the first time since Rachael began school, they had an assembly that included an emphasis on a dress code. Rachael informed me that any tank top had to have a two finger-width strap. An abridged Rights & Responsibilities packet that was more for kids came home, and a section specifically addressed dress code. There was nothing in it that set off alarm bells for me: cover your tummy and underwear; no inappropriate logos or swearing; wasn’t divided into a boys section and girls section. So it hasn’t been a problem, until this morning.

Today, Rachael put on a dress that she has worn to school countless times. It is the dress seen above: a halter-style dress with spaghetti straps.

Here it is again, making you feel uncomfortable because a 9 year old is showing off so much shoulder.

If it were inappropriate for school, I wouldn’t let her wear it. As we were walking out the door to the bus, Rachael stops, with an awful look of sudden realization on her face.
“Mom, these straps aren’t two inches!”

There wasn’t any time to change, (and even if there were, I still wouldn’t have made her change.) So, now Rachael is going to be focused on worrying that she’s going to get in trouble for violating the dress code, rather than focusing on learning. I’ve at least raised her well enough to be indignant about the fact that the reason for the dress code rule is so too much skin isn’t showing.
“That’s ridiculous!” she railed. “As long as you’re covered and there’s nothing hanging out, it’s fine!”

I told her that if she did get in trouble for some reason, that she had my permission to wear the dress and that I would get in someone’s face. Still, I know that her joy of making a cookie map of Virginia today has been slightly tainted by the fact that the school has made her self-conscious about what she’s wearing.

Every so often I have a stress dream about being back in high school. I’m an adult and have graduated, but for some reason I have to go back and take a class for my graduation to count or before I can graduate from college. In my dream, I float along the hazy halls of my old high school, trying to figure out where I need to be. Usually it’s a stress-inducing class, like math or my AP English class. My AP English teacher had thinly veiled contempt for me because of a mistake I made in her English class my freshman year. She outright hated my best friend, with whom I sat in class, and was often my partner in crime to skip that class and choir to go hang out at the mall. When I told my mom after graduation that I had skipped that class, she didn’t blame me.

Rachael is beginning kindergarten next week. Daily, I feel like I’m either going to throw up, birth an anxiety baby, (the head is down and everything!) or have my own John Hurt moment. The anticipation is the worst. I know everything will be fine once we get over the first day hump and have a routine established. Until then, I have all the worrying pent up.
I have the It’s really unlikely worries:
– What if she doesn’t come home on the bus?
– What if she’s kidnapped or molested?
– What if Sandy Hook or Columbine happens at her school and she’s traumatized or taken from me?

I have the It could probably happen worries. She’s really small for her age, wicked smart, tends to have an opinion about things, and marches to the beat of her own drum. (She’s at a pool party today, and rather than join the other kids in playing sharks versus minnows, she would rather keep on with water ballet on her own.) While these are things I really love about her, they are all perfect ingredients for Bullied Soup. Or maybe it’s more of a goulash. Borscht?

When we lived in Ohio, I remember dreading riding the bus. There were two older boys who tortured me by making me look at Garbage Pail Kids cards, whose images can be pretty upsetting to a five year old. In fourth grade, a boy punched me on the playground, and my teacher basically told me to suck it up. At some point in elementary school, my friends tricked me into eating a dog biscuit. My “FRIENDS”! I wasn’t usually invited to parties. I did get to go to the “cool girls” slumber party once, but found out at the party that it was only because someone else couldn’t come. I was an alternate.
I know that all these experiences shaped me into who I am, but I pray Rachael won’t have to endure anything like them. The fact that control is just an illusion and that my role from now on will be that of damage control is slightly terrifying.

Rachael going to school also means that I’m going back to school, too. It will require me to put on my big girl panties and interact with school types and parents….as a confident adult! It could mean trusting someone younger than me to know what they’re doing. It could mean sticking up for my daughter with a teacher who is twice my age when my initial instinct would be to shut up, raise my hand and wait to be called on, and say, Yes, ma’am. It will mean taking a deep breath and walking into that first PTA meeting, getting the pecking order sorted in my mind, and then trying to play nicely with the other girls. (I’m sure I’ve already made a great first impression by chewing out the lifeguard/pool manager at our pool in front of one of the other kindergarten moms/rising K play group coordinator. But, in my defense, he was being a dick and I couldn’t let it go because…principles.) It also means finding the balance between letting Rachael fail, and learning from those failures, and making sure she stays on track. It means making sure, through the fibro fog that clouds my brain, that I stay on top of things like getting lunches made, forms completed, and deadlines met.

The night before my first day of high school, I had an anxiety attack. I paced back and forth in the hall and my bedroom, declaring that I was NOT going. As we stand on the precipice of the rest of Rachael’s education, I try to remain outwardly calm while Rachael bubbles with excitement, ready to jump. But inside I am 14, saying, I’m not going, and you can’t make me!

As far as letting go for my first baby, I believe Michael Gerson puts it more eloquently than I.